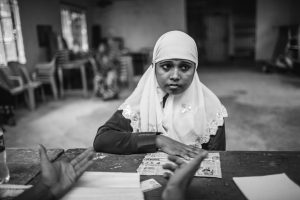 Nessaro, 27, MRC 44180 camp number. A Rohingya from the official Kutupalong camp. She got married at 17. Now divorced, her husband did a 5 year sentence for theft. Three years ago, her son passed away. Nessaro is desperately looking for work. The photo shows her, being interviewed by Paweł Skawiński, a Polish Press Agency (PPA) correspondent. Cox Bazar (Bangladesh), October 2013.

The Rohingya people are an ethnic Muslim minority, living in north-western Myanmar. Having been persecuted for decades by the Buddhist majority, especially by the military junta, they escape to near Bangladesh. It is estimated that in the result of ethnic cleansing (more and more often named by experts as genocide) from 300,000 to 500,00 of them have escaped to Bangladesh over the last decades. Scarcely 30,000 refugees found asylum in official camps, supported in basic way thanks to the government’s permission by the UNHCR, Muslim Aid, ACF, MSF and other NGOs. The remaining tens of thousands of people stay in so called makeshift camps in Cox’s Bazar region, not possessing the status of refugees and not being entitled to field rations, right to work and to educate. They are Unregistered.