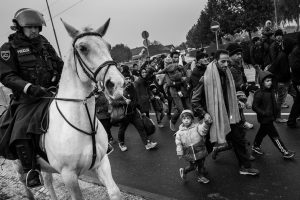 Refugees walk through the village of Dobova, Slovenia escorted by a horse-riding Slovenian police.

In 2015, Europe faced its largest migration crisis since World War II. The vast majority of migrants came from war-torn Syria and Iraq. Others fled their countries to escape religious persecution and possible death. Many of them took their chances aboard unseaworthy boats in their desperate attempt to reach Europe by sea, hoping for a better life. The journey is long, plagued with uncertainty. Thousands have died. According to the International Organisation for Migration, more than one million migrants flowed into Europe last year, sparking a crisis as countries struggled to cope with the influx.