There are only 10 days left before the start of the festival on November 20th – and things are starting to heat up. We’ve just spent all day running around town (but on a tuk-tuk) distributing flyers, posters and invitations – we’re planning to print more as they seem to run out fast!

Most of the hanging will take place this week, but a few exhibitions are already up. At Hotel de la Paix – Paolo Patrizi’s beautiful European Starlings and Sokdam’s Life & Disability.

Jean-Yves and Francoise at the hanging of Paolo's exhibition

Patrizi’s work is indoors in the art lounge, and Sokdam’s is presented in a rather unique outdoor exhibition. I think it’ll be best not to give away the surprise of the exhibition – better for you to see it in person! What’s great is that even though Sokdam is now studying in a school in Phnom Penh, he’ll be coming back to Siem Reap to join us for the festival and the Anjali Photo Workshops. (Life & Disability was produced during the 2009 workshops.) 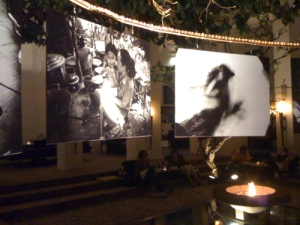 Zalmai’s Invisible in the City and Michel Kirch’s Baltic Memories is also now up at McDermott Gallery.

The best news of today was that the photobooks finally arrived from our wonderful printers in Phnom Penh who has been working overtime to get everything done.

Cambodia, our Vision is  a photobook featuring photographs taken by the children of Anjali House during the workshops between 2008 and 2009 – its 220 pages thick, so make space for it in your luggage if you intend to buy a copy!

Sohrab Hura – past participant of the Angkor Photo Workshop and current coordinator of the Anjali Photo Workshops – arrived yesterday and only have 3 days left to prepare the workshops for almost 45 kids. He looks forward to having no sleep for a while.